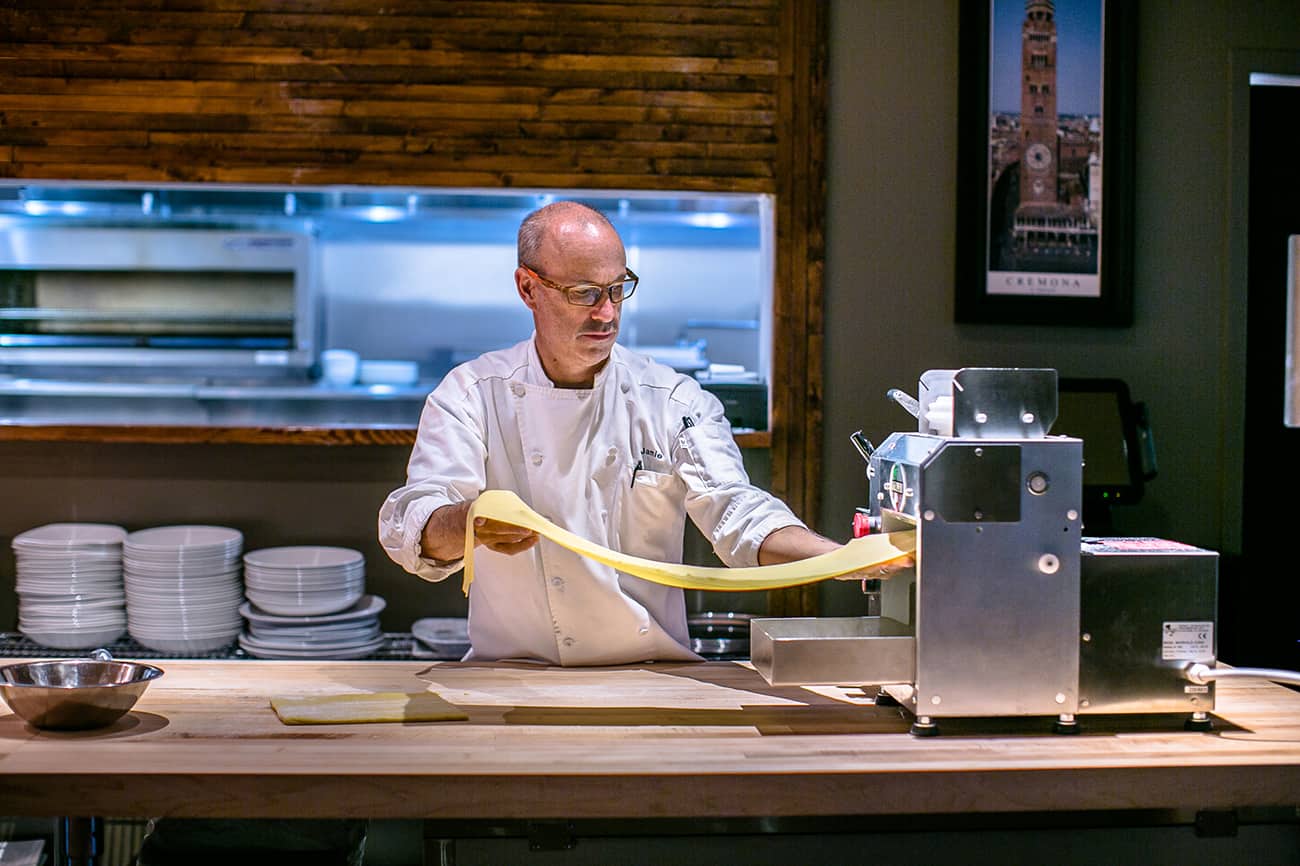 The opening of il Giallo Osteria & Bar is the culmination of many years of work, life experience, ups, downs, trial, error, close calls and so on, yet the best part of it all was the unexpected help along the way.

It started back in 2010 when after yet another economic downturn, things were looking dark for VVV (Veni Vidi Vici) , since during a recession, the City of Atlanta decided to start the 14th Street Bridge project (and do ALL it could to prevent people from driving to the restaurant). I walked into the restaurant one day and there, in the middle of the dining room, was Leonardo Moura. He had left our company a year prior for another venture and I had not seen nor heard from him since, and next thing I know, he is standing in front of me. I ask, “what are you doing here?” to which he responds, “I’m the GM here now!” Thus our partnership began, with much unforeseen aid from the universe.

A couple of years passed and during that time Pano started expressing his desire for Leo and I to acquire the restaurant in some way, shape or form. We worked on the project for a good long while and for a number of reasons it could not work out, with good faith on both sides of the deal. The outcome was that Leo and I knew we could not quench the fire that Pano had set-we had to strike out on our own. Our challenge was formidable-we needed money, a loan, investors, a business plan, a design, a builder and of course a space. In our infinite wisdom, we of course knew what our concept was, duh, Italian- I didn’t spend nearly five years in Italy for nothing! Well, we had a few (read-many) more lessons to learn along the way, but we had begun.

Against any and all common sense, we started looking for a location.  Rather than thinking about how we were going to pay for it-we were talented, had great reputations, hardworking, but flat assed broke. Fortunately for us, the universe started to pay attention and we began having the right people put into our path, through no merit of our own.

We of course had plenty of industry friends who have gone out on their own so that was a natural starting point. Doug Turbush reminded us that we might need a business plan so he emailed his. Kevin Rathbun spent hours with us telling us how he put together his first deal.  Chris Hall was kind enough to send us to Allen Jones to take our assumptions and “concept” to an actual business plan.  Angus Haig taught us that we could be broke but we better have skin in the game (we did not figure that one out for a while), and so many more that to list them all would require many more pages!

In any case, we found a location with the help of the indefatigable and tenacious Christina Poodt, who happens to be Leo’s mother-in-law. It was a great location, a great deal, but there were just a few small problems.  We still had not secured the bank loan, we were still did not have investors and we did not have a design.

In the same vein of not believing in accidents, through all of this time we were still at employed at VVV.  One weekend I was doing a charity event up at Lake Lanier for a couple that neither of us had ever met. As soon I arrived at their home we hit it off by discovering that we had some mutual friends and by the end of the night Tim and Angie Perryman offered to invest. I have two other lifelong friends, Row Henson and Carol Ann Weiss whom I turned to, and in short order we had our investors in place. To make the long story short, we were able to secure the loan and move forward, though of course we still lacked a designer, an architect, a builder and all through this process Pano kept reminding us that we still did not have a concept, more on the last one later.

We had been in conversations with a designer over the course of the last couple of years but failed to agree on terms so we had to move on. Then more evidence of fate showed its face in another lifelong friend, Vivien Patrie. I first met Vivien in 1992 through Sam Than, current general manager at Bistro Niko, whom I had met and befriended when I first started working at Atlanta Fish Market in Lenox Square.

We went to dinner at the Patrie home, Ron and Vivien, had a great time and they told me that they were heading to Italy, specifically Piemonte in just a couple of weeks. I of course told them I knew some great places and that I would send them all of the info, except this was pre-email and cell phones, so it never happened. A month later Sam called me to say that the Patries were back home and wanted to have dinner at VVV with us again to talk about their trip. The day came around and I skulked in feeling like a bum, as I had not delivered as promised. I made my heartfelt apologies (I still felt rotten though) and they said not to worry for they had found some interesting places and wanted to share them with me.

I started looking through the pictures, actual glossy photographs, and I began to recognize some things such as a one hundred year old rose bush, a formal garden that had a couple of apricot trees and before I knew what hit me, there are Ron and Vivien posing arm in arm with the owners of the Locanda del Sant’Ufizzio, the place I worked for three years! They had found the place through a random recommendation from a little enoteca in Asti (accident?)!  From that moment, our lives came together and we became great friends. So the years pass and we are working on this developing our restaurant, and my dear friend Ron Patrie whispers into my ear, “you need to get Vivien to design the restaurant” and the light finally went on in my head.  We had a designer!

During this time, Pano was unrelenting in his insistence that we did not have a concept, yet we still could not see it until one busy Saturday night at VVV.   A woman (whose name I never found sadly) requested a butternut squash tortelli that had been the pasta special from the previous night. I certainly did not want to disappoint her but the reality was that there was no filling left and only one raw butternut squash. So I naturally said “sure, I can do that.”  I peeled the squash, cut it into small pieces, put it “in the pool” (an old saying for the fryer), patted it dry, chopped it up, rolled out the dough and 15 minutes later the mystery woman had her fresh made tortelli di zucca.  In the process she handed me “the concept”-make the fresh pasta during service and out in front of everyone. Once again, help from where I expected it the least.

We now have a concept, the beginnings of a design, the loan, investors, an architect and finally a builder, which is another long story for another time but for now let’s skip ahead to opening day, October 31, 2015, a Saturday night!

We were as ready as getting the Certificate of Occupancy two days prior would let us be (translate-not very), the doors open with a solid influx of guests and my blood pressure was steadily rising with each squeak of the new front door. The first orders start to flow in, we are furiously making pasta trying to keep up and I look over to the front door and there is Sam Than, that very same Sam that had introduced me to Vivien 20 years ago. I walked over to him and said, “Hey, thanks for coming to dinner,” to which he said, “I’m not coming to dinner knucklehead, I’m here to work.” I think if you look up true friend in the dictionary (I guess it’s Google or YouTube now), it would look something like that moment.

So here we are two years later, getting ready to celebrate Gialloween (soon to be a huge national holiday…) and yes we have gotten here with our hard work and determination, BUT without the help and guidance from so many we would have floundered very early on. Our most special thanks go to Pano and Vivien for their generosity, discipline, and true desire for us to succeed. The list of people to thank is enormous, but a few others whose names I did not mention yet are our families of course, Gerry Klaskala, Gary Mennie, Jackie Merkel, Dennis Girnys, Kim Eels, Oliver Cooper, Hal Nowak and Susan Kite – each and every one of you have made a difference to us in one way or another. Thank you to all, for all of the help, advice, support and belief in us. I thank God (the universe that’s listening) for placing all of you in our paths and we look forward to the yet unknown people that may need our help and in whose path we shall be placed. Thanks for reading! 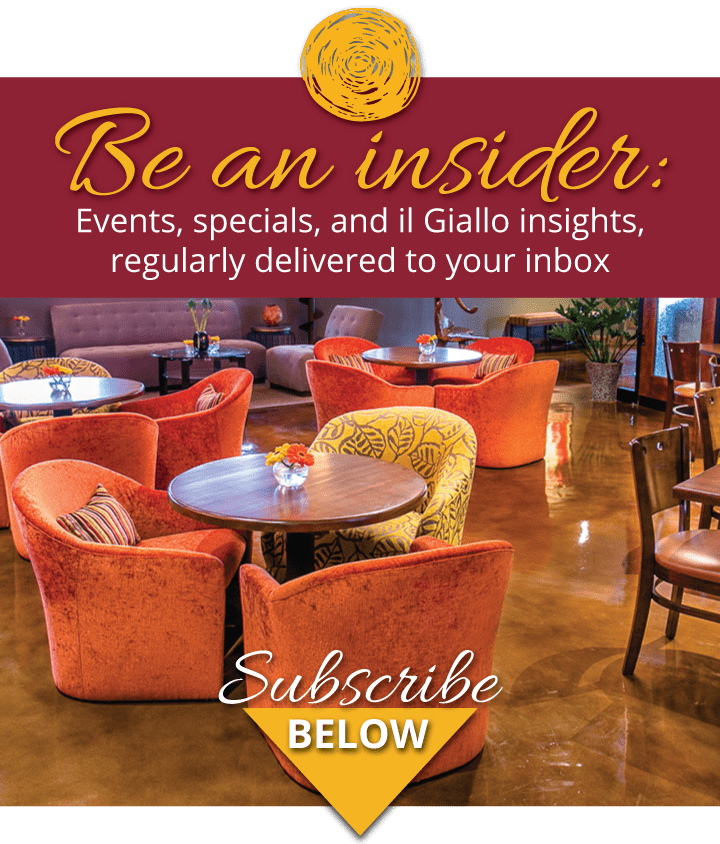