A native Atlantan, Libby Muldawer’s interest in baking was sparked by her mother’s own passion for baking, and fostered by family friends who wanted her talents to be realized.

After obtaining a Hospitality Degree at Georgia State, her mother’s friend saw the culinary acumen in Libby and suggested that she get a job with her friend Pano Karratassos, owner of the esteemed Buckhead Life Restaurant Group. As fate would have it, Libby was hired to work as an Assistant Pantry Chef at Pricci alongside esteemed Chef Jamie Adams. Although she enjoyed cooking, she knew her real passion was baking and left Pricci to attend the Culinary Institute of America (CIA) in Hyde Park, where she graduated from their extensive Baking/Pastry Program.

While in school Libby worked for nationally recognized chef Larry Forgione at his NY establishment, Beckman Tavern. Then, following graduation, she returned to Atlanta and worked at the Cherokee Town Club for 3 years under Master Pastry Chef Chris Northmore. At the time, Northmore was one of only three Master Pastry Chef in the country, and Chef Libby credits him for teaching her the finer points of creating spectacular breads and pastries.

Libby returned to her old stomping grounds with Buckhead Life, this time at Veni Vidi Vici, where she again worked alongside Chef Jamie Adams. Years later, when Chef Jamie and Leonardo Moura decided to leave Buckhead Life and open their own restaurant, il Giallo Osteria &amp; Bar, it was only natural that Libby would be made Pastry Chef at this new venture.

Today, they continue this dynamic culinary relationship, as Libby credits Chef Jamie for coming up with many of the ideas for desserts and then she creates the chemistry and flavors behind them, producing some of the most beautiful, delicious dessert menus in Atlanta.

Anyone who has enjoyed her Focaccia, Tiramisu, Croissant Bread Pudding, Strawberry Pizza can attest to the magic in this winning collaboration. 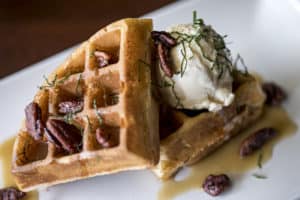